Video footage of micro-ultrasound probe scrolling along the z-axis of the lower abdomen of an egg-injected mouse demonstrates the presence of a bright, echogenic (dense) round granuloma impinging on the upper right side of the urine-filled (black), otherwise ovoid bladder lumen. From Fu et al.

We are also exploring other in vivo imaging modalities such as 2-photon microscopy:

Urogenital schistosomiasis, infection by parasitic Schistosoma haematobium worms, persists as a global scourge in part because of a lack of experimentally manipulable animal models of this disease. Mice are cheap, easy to handle, and feature many species-specific tools compared to other animal models, but their small size can prove challenging for certain experimental tasks. Moreover, natural transdermal infection of mice with S. haematobium does not consistently result in urogenital disease. Using microsurgical techniques developed in our laboratory, we have successfully collaborated with Dr. De’Broski Herbert at the University of Cincinnati to develop more reliable mouse models of S. haematobium infection:

Bladder wall microinjection of mice with S. haematobium eggs results in chronic inflammation very similar to that seen in human urogenital schistosomiasis. The techniques involved are described in detail in our JoVE article (see video below) and in Fu et al. Our hope is that these novel mouse models will accelerate new diagnostic and therapeutic modalities for urogenital schistosomiasis, as well as enhance fundamental knowledge of this global disease. For example, we are working with Drs. Conor Caffrey and Joseph Liao to develop better diagnostics for this infection.

S. haematobium research has also lagged behind work on other parasites due partly to difficulties with establishing stably transgenic schistosomes. We are optimistic that recent advances in comparative genomics, functional genomics, and tractable animal models will facilitate explorations of the interactions of S. haematobium with host systems: 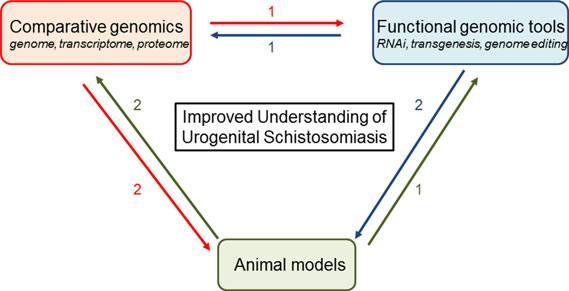 For instance, data from high-throughput genomic, proteomic, and transcriptomic sequencing can be annotated through functional genomic tools. Transgenesis would facilitate forward genetics by insertional mutagenesis, that, in turn, can be analyzed by genomic approaches. Genetically modified parasites would be tested in tractable rodent models, and parasites obtained from these models would be studied using genomic approaches and functional tools. Hypotheses derived from comparative genomics would be tested using functional genomic tools and animal models of urogenital schistosomiasis (From Rinaldi et al.)

So how will be generate stably transgenic schistosomes? The figure below shows one possible successful strategy: 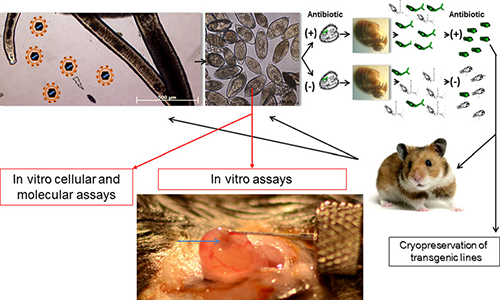 Cartoon depicting an approach to derive and maintain stable lines of transgenic schistosomes. A female schistosome releasing in vitro laid eggs exposed to murine leukemia virus retroviral virions ( particles in upper left hand panel) and cultured with or without antibiotic. Miracidia hatched from eggs would be used to infect Bulinus truncatus snails. Cercariae cultured (through so-called in tandem antibiotic selection) with or without antibiotic could be screened for the presence of the transgene, for transgene copy number, and for expression. The transgenic line(s) could be propagated and maintained in hamsters. When the transgenic line emerges (eg, a line expressing an small hairpin RNA targeting a gene of interest), the eggs would be collected and analyzed in vitro by cellular and molecular assays and in vivo assays, including mouse models of urogenital schistosomiasis (adapted from Rinaldi et al). Image under “In vivo assays” shows bladder wall injection with Schistosoma haematobium eggs (as described by Hsieh et al). The egg bolus can be seen as a semiopaque bleb localized to the bladder wall (arrow in bottom panel). From Rinaldi et al.

If murine leukemia viral-based approaches do not work, there are additional alternatives to establishing transgenic schistosomes: 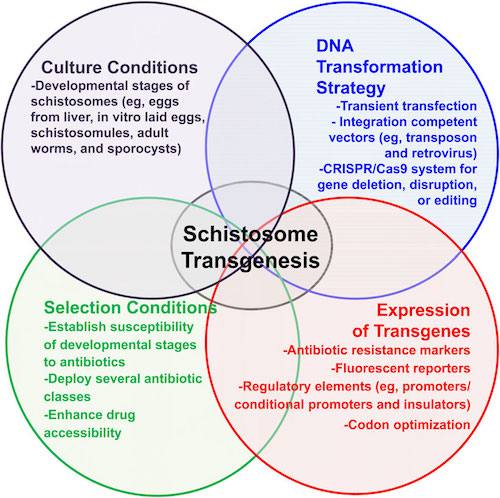 When we made single cell suspensions from the vaginal tissues of S. haematobium egg-injected mice, we noted extensive numbers of macrophages and CXCR4+ and CCR5+ T cells: 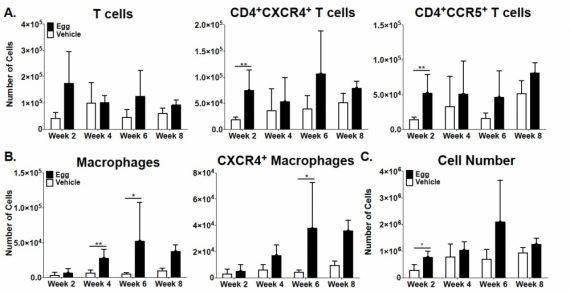 Hence, it is plausible that FGS contributes to HIV infection risk by increasing the numbers of potential HIV target cells in the tissues of the female reproductive tract.

Urogenital schistosomiasis, infection by parasitic Schistosoma haematobium worms, induces bladder urothelial (inner cellular lining) changes, including bladder cancer. One of the precursor lesions of bladder cancer is urothelial hyperplasia (cellular proliferation). This is a prime example of microbial-host interactions, and we have demonstrated that our mouse model of urogenital schistosomiasis leads to urothelial hyperplasia: 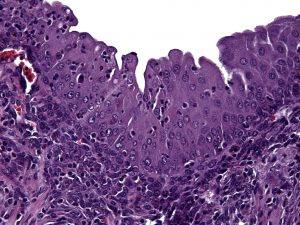 We have confirmed in this paper that although our model does not feature natural development of cercariae into worms that lay eggs, the bladder cytokine response to injected eggs is unchanged whether or not mice are pre-exposed to cercariae: 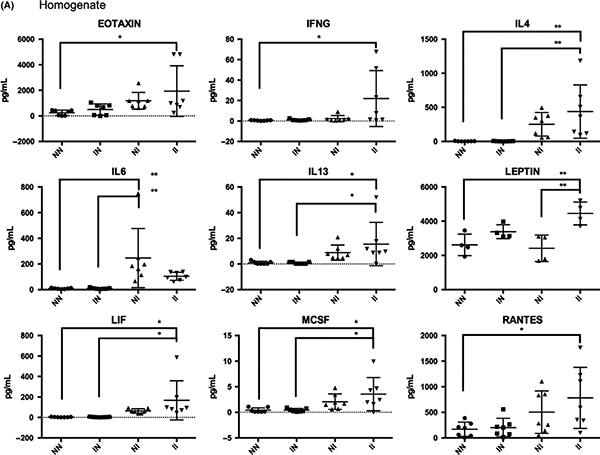 In subsequent publications we have used our model to define the roles of p53, IL-4, DNA methylation, and macrophages in the bladder manifestations of urogenital schistosomiasis. We have also characterized how the presence of S. haematobium eggs in the bladder affects its proteome. Lastly, we have adopted our injection techniques to generate a model of female genital schistosomiasis.

With regards to urothelial barrier functions, our microarray data (Ray et al., PLOS Neglected Tropical Diseases) indicates that a single exposure to S. haematobium eggs triggers significant changes in transcription of urothelial function-related genes. This includes decreased transcription of all uroplakin genes, in addition to several tight junction-related genes (see figures immediately following this paragraph). Collectively, these urine barrier function genes are critically important for the ability of the bladder to safely store and expel urine. We speculate that S. haematobium may have evolved to compromise the human host bladder barrier in order to facilitate egg expulsion into the urine and thus propagation of the life cycle. Indeed, we have observed shed eggs in the urine of experimentally infected animals: 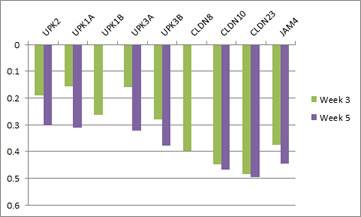 Inflammation leading to tissue fibrosis is the end result of many diseases besides urogenital schistosomiasis, including renal failure, autoimmune diseases such as systemic sclerosis, and certain chronic infections. These pathological processes support the concept of the immune system as a key regulator of tissue remodeling. We are investigating the means by which this may occur in urogenital schistosomiasis. Some of our work on these stromal effects of urogenital schistosomiasis are collaborations with Philip Beachy. This work may identify common immune mechanisms of fibrosis that may serve as therapeutic targets.

The complexity of mechanisms of fibrosis in our model of urogenital schistosomiasis is hinted at by our microarray data (Ray et al., PLOS Neglected Tropical Diseases). Numerous genes linked to extracellular matric remodeling and fibrosis are differentially transcribed in the S. haematobium egg-exposed mouse bladder: 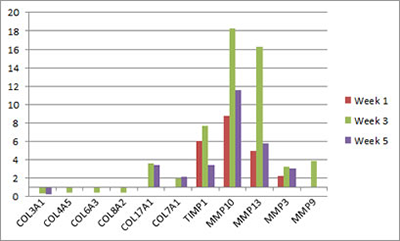 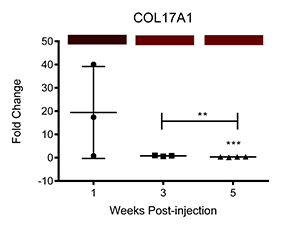 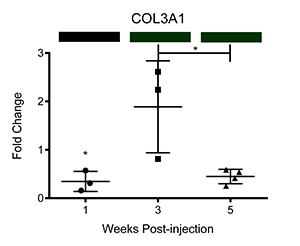 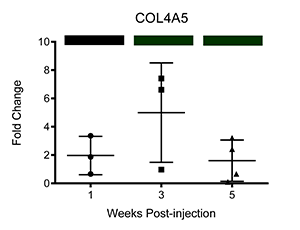 If you are a student, resident, or post-doctoral fellow interested in participating in research as a member of the Hsieh laboratory, please visit our Opportunities page.