Urine is Not Sterile: the Bladder Microbiome

Traditionally the healthy bladder has been believed to be sterile. This was based on a lack of bacterial growth when attempting to culture urine on media. The discovery of the microbiome, the bacteria and other microbes that live in and on our bodies, has upended this dogma. Culture-independent, molecular methods of characterizing the microbiome have revealed that even in healthy individuals with normal bladders and negative urine cultures, the urine contains numerous bacteria. We helped demonstrate this in Groah et al.. This paper made a number of interesting observations. For instance, men and women had different urine microbiomes: 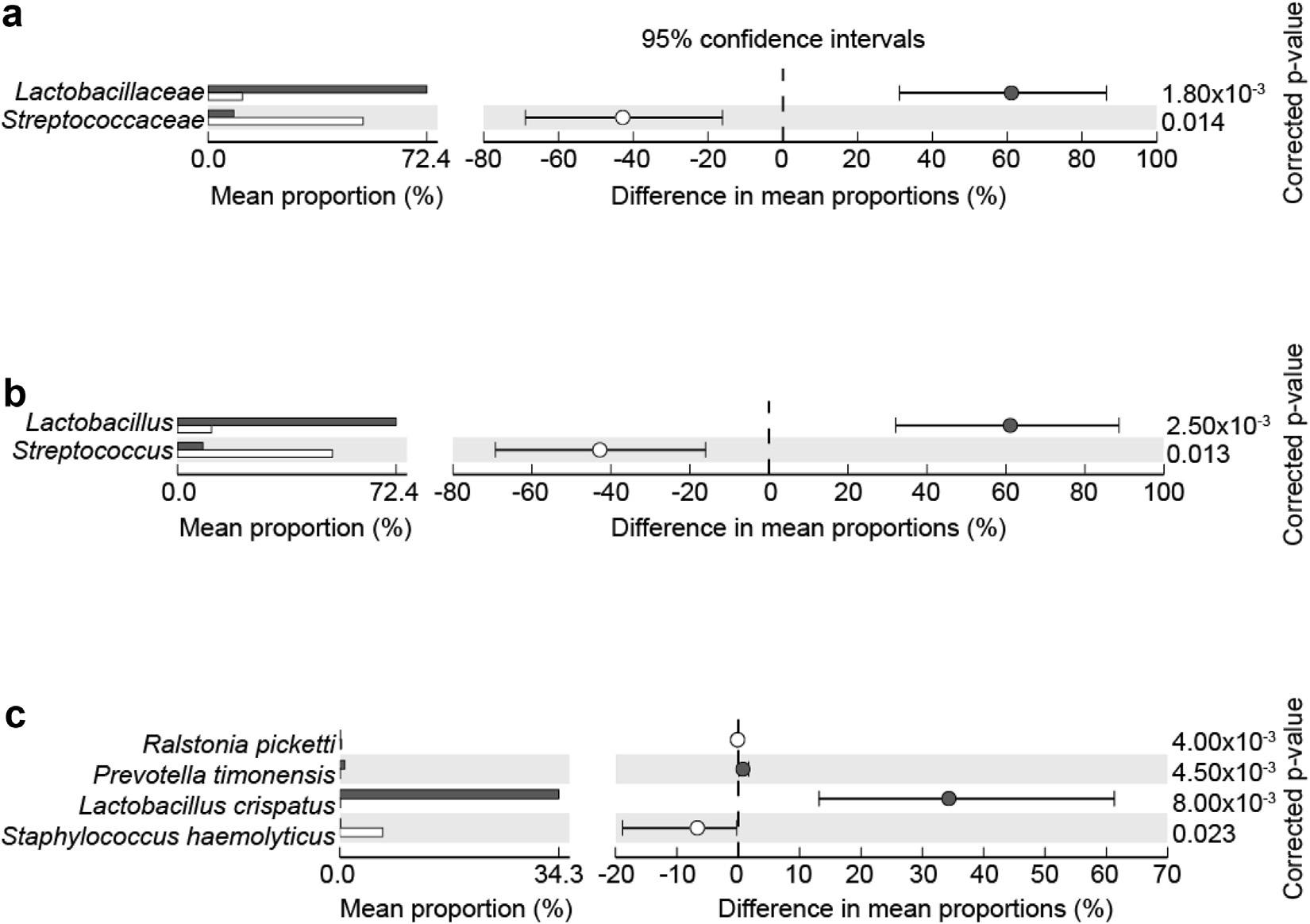 Significant differences in urine microbiomes of all females (gray bars) vs. all males (open bars) at family (a), genus (b), and species (c) levels.

We also noted that the urine microbiomes differed between patients with normal vs. neuropathic bladders: 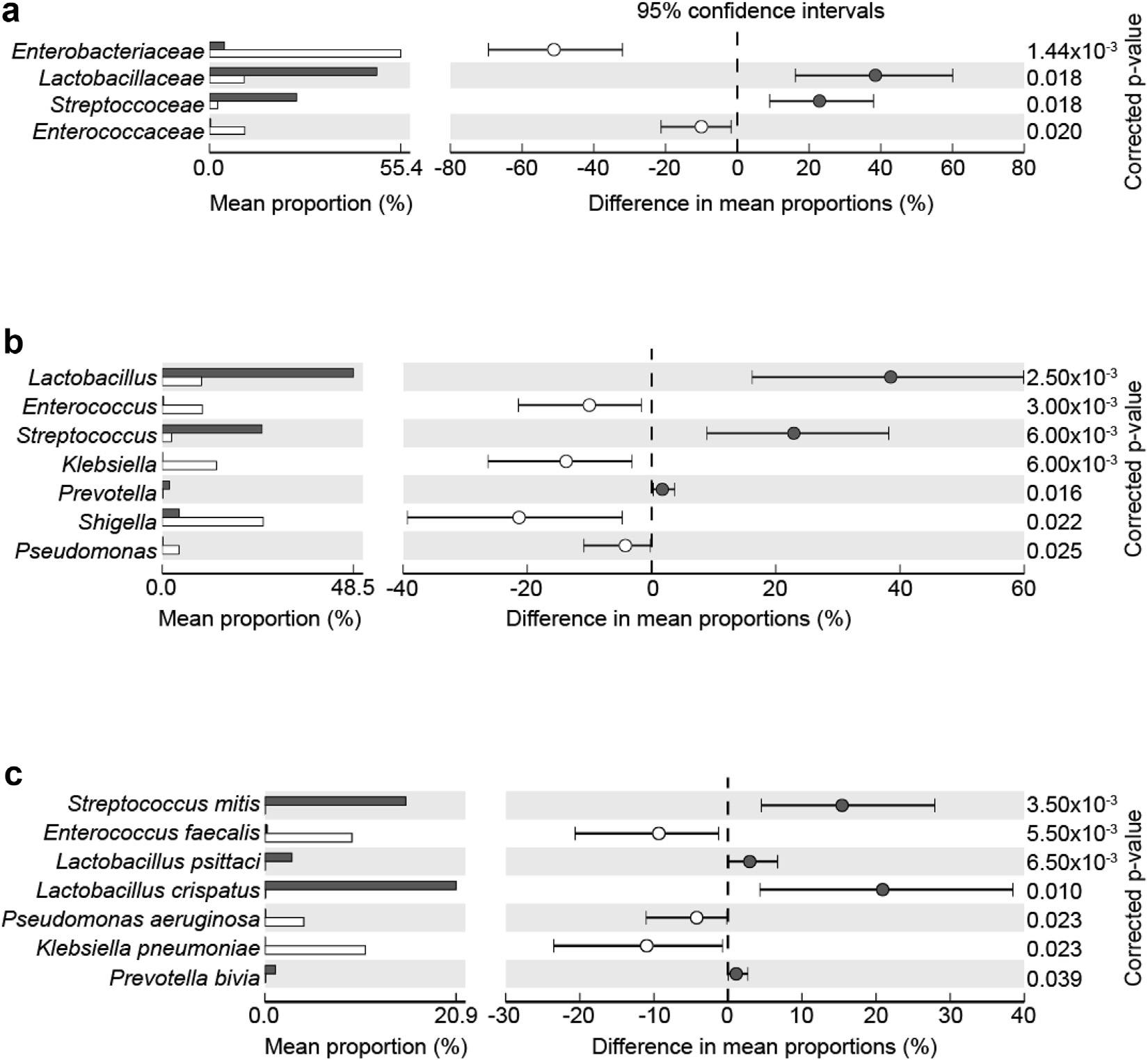 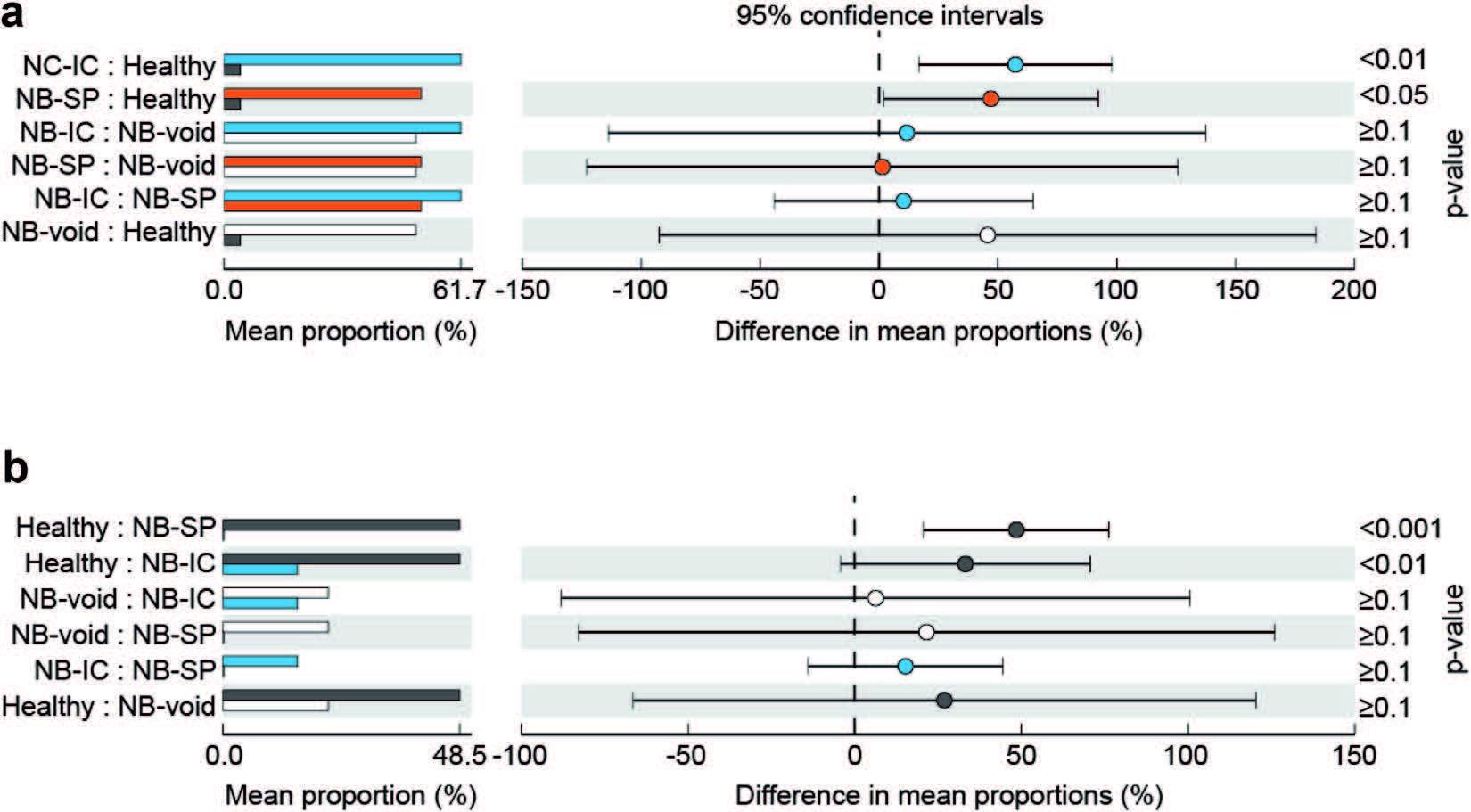 We were surprised to find that there was no apparent relationship between microbial diversity and pyuria:

Regardless, our findings contribute to the burgeoning literature confirming that the urine is not sterile. These observations have important implications for bladder health and disease; it may be possible to manipulate the microbiome to affect outcomes of bladder-related conditions.

Approximately half of all girls and women and some boys and men will experience at least one urinary tract infection (UTI) during their lifetime. UTI are the most common hospital-associated infection, and can lead to death in critically ill patients. Effective therapy is based on antibiotics, but bacterial resistance is an ongoing issue for management of UTI.

An unexpected source of antibiotic resistance among bacterial uropathogens may be the general stress response. This pathway is activated by a number of environmental stressors, including antibiotics, starvation, and disinfectants. In collaboration with A.C. Matin‘s laboratory, we demonstrated the in vivo mechanisms by which the general stress response imbues bacteria with resistance to specific antibiotics. Specifically, the general response gene rpoS seems to confer resistance of uropathogenic E. coli to gentamicin:

We have worked closely with colleagues at Stanford University to develop new aminoglycoside-inspired antibiotics that not only feature less ototoxicity (inner ear damage is a well-known complication of use of these antibiotics), but also exhibit preserved antibacterial activity in the mouse model of UTI: 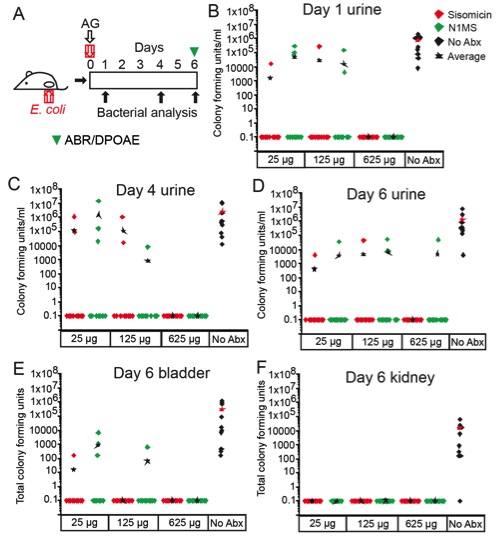 Panel A shows a schematic of the experimental design. Mice are transurethrally inoculated with uropathogenic E. coli and given aminoglycoside (“AG”) antibiotics on the same day. On days 1, 4, and 6 post-infection, urine, bladder, and kidney levels of bacterial infection were measured, and on day 6 post-infection hearing function was also measured (ABR/DPOAE). Panels B-E demonstrate that higher levels of both sisomicin (the parent aminoglycoside compound) and the non-ototoxic N1MS derivative antibiotic both clear bacteria better than no antibiotics. From Huth et al.

Below is video footage from our Journal of Visualized Experiments article on the mouse transurethral catetherization-based UTI model:

Even if there is a true biological connection between urogenital schistosomiasis and susceptibility to bacterial UTI, the associated mechanisms are not understood. Hypothesized mechanisms include urinary stasis from fibrotic obstruction and host immunomodulation by the parasite. We published the first mouse model of S. haematobium-bacterial uropathogen co-infection (Hsieh et al., Infection and Immunity, 2014). In this model, a single bladder exposure to S. haematobium eggs triggers granuloma formation that can be seen by ultrasound and histology of bladder sections. This resembles human bladder schistosomiasis: 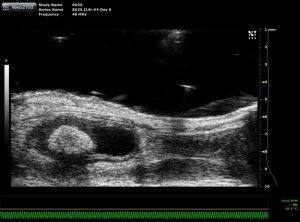 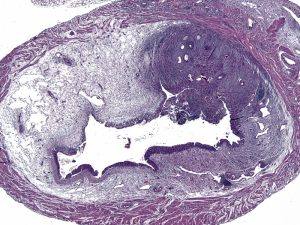 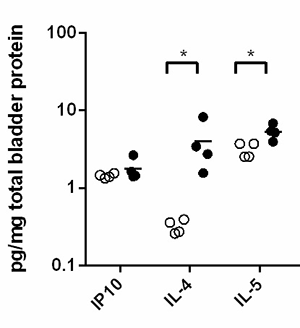 Importantly, we found that a single exposure to parasite eggs also makes BALB/c mice susceptible to bacterial UTI when they are otherwise resistant: 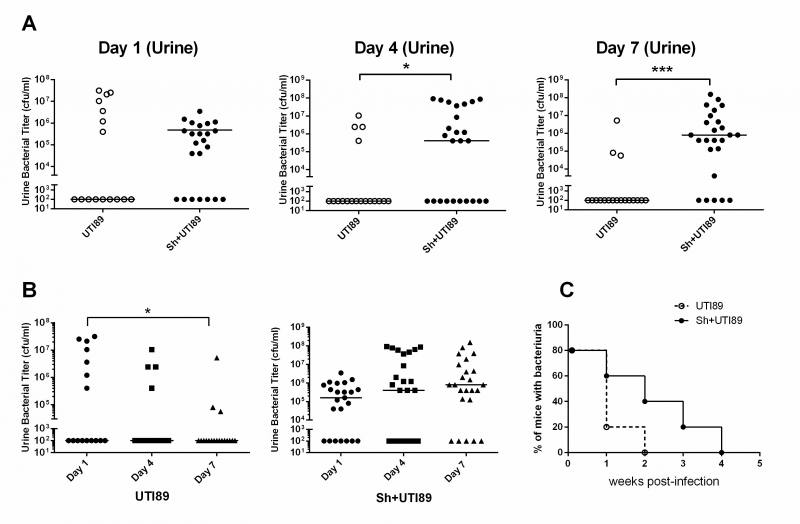 On occasion filamentous-appearing E. coli cells can be seen in the vicinity of eggs (ovoid objects below) within bladder granulomata. 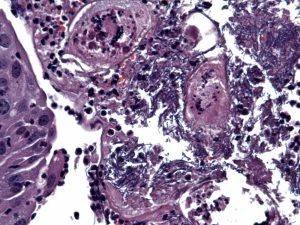 Given the prominence of bladder IL-4 expression after exposure to S. haematobium eggs, we next asked whether this cytokine plays a role in susceptibility to bacterial UTI. Indeed, we found that ablation of IL-4 receptor alpha (IL-4Rα) signaling and neutralization of IL-4 restored the baseline resistance of BALB/c to bacterial UTI despite prior exposure to S. haematobium eggs: 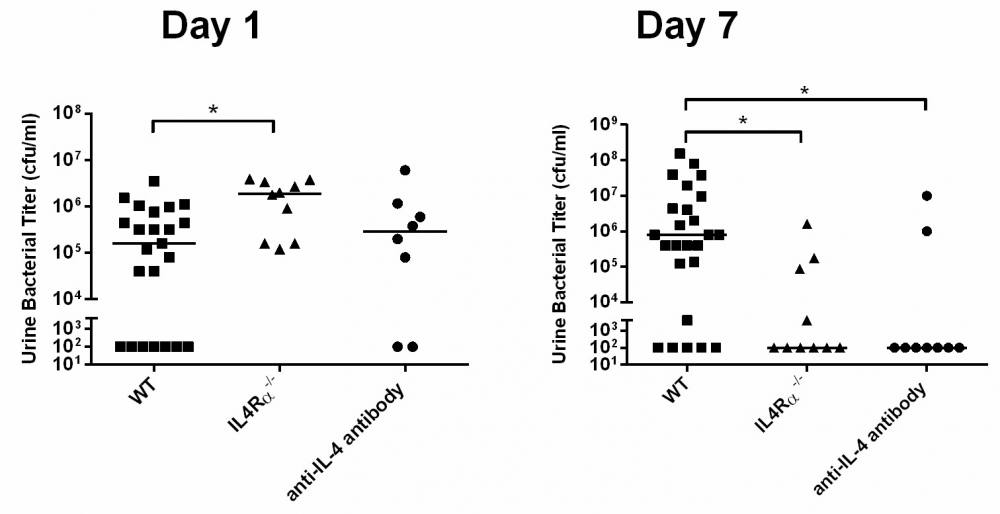 In the course of characterizing the leukocytic infiltrate of bladders in our model, we found that numbers of NKT cells were decreased in co-exposed versus bacterial mono-infected bladders: 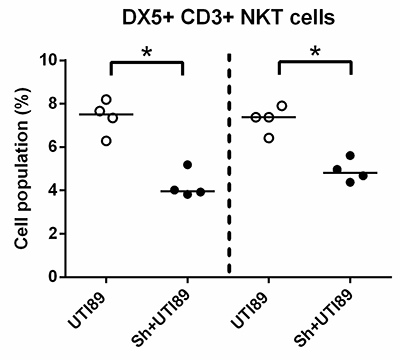 Given that schistosome-induced, non-NKT cell leukocyte infiltration may dilute NKT cell numbers in the bladders of co-exposed mice without exerting a specific functional effect on these cells, we next examined NKT cell biology on a per-cell basis. Invariant NKT (iNKT) cells from co-exposed mice expressed less interferon-γ (IFN-γ) per cell compared to those from mice infected with UTI alone: 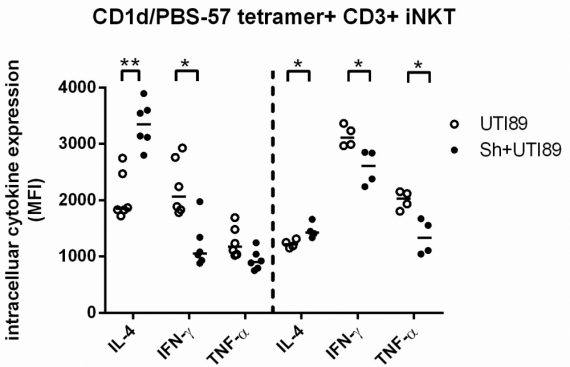 Since NKT cell activation appeared to be compromised, we then examined the biology of CD1d, a crucial antigen-presenting molecule for NKT cells, and any associated links with IL-4. Accordingly, we found that co-exposure resulted in lower CD1d expression in bladder antigen-presenting cells (APC) than in bacterial UTI alone in an IL-4Rα-dependent fashion:

Given that S. mansoni eggs produce copious amounts of the interleukin-4 inducing principle of S. mansoni eggs (IPSE), our theoretical model is that S. haematobium eggs, like their S. mansoni counterparts, induce basophil and/or T cell production of IL-4. We believe IL-4 acts upon bladder APC (macrophages and DC) to decrease their expression of CD1d and MHC Class II. In turn, this results in suboptimal bladder NKT cell activation for promoting clearance of bacterial urinary tract infection, a decreased IFN-γ:IL-4 ratio among bladder iNKT cells in particular, and prolonged bacteriuria: 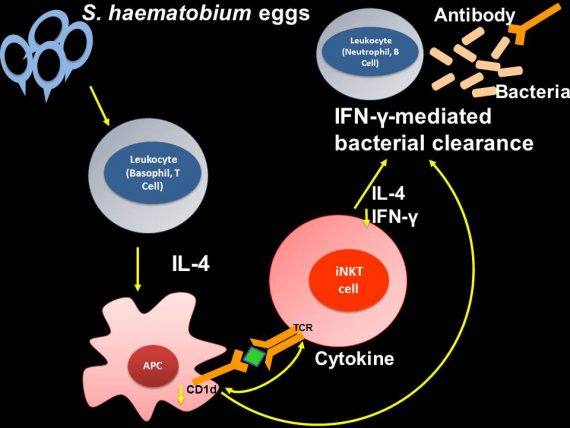 The current gold standard for diagnosis of urinary tract infections (UTI) currently depends upon growing bacteria in culture. Final identification of bacterial species and their antibiotic susceptibility can take days, which delays optimal care of patient with UTI. In addition, urine cultures have a significant false negative rate due to many reasons, including the presence of fastidious organisms that do not grow well in culture, and masking of bacterial growth following recent antibiotic exposure. This has led to the emergence of molecular methods to diagnose UTI, which rely upon PCR or sequencing to identify bacterial DNA. These methods have in turn been criticized because they may yield false positive results by identifying DNA from dead bacteria. We have developed propidium monoazide-based PCR methods for amplifying DNA from live bacteria in urine. Our results suggest that non-PMA bound DNA from live bacteria can be present in urine, even after antibiotic treatment. This indicates that viable but non-culturable E. coli can be present following treatment of UTI, and may explain why some patients have persistent symptoms but negative urine cultures following UTI treatment. 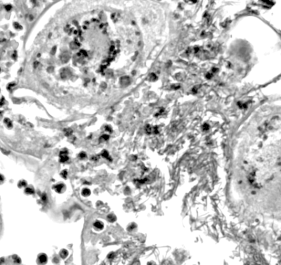 If you are a student, resident, or post-doctoral fellow interested in participating in this research as a member of the Hsieh laboratory, please visit our Opportunities page.